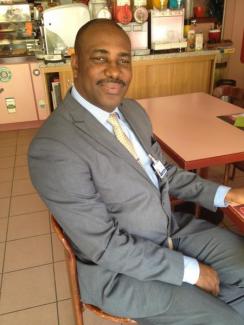 At a brief presentation and orientation ceremony, Mr. Silas Siakor on behalf of the Board welcomed Mr. Gray-Johnson with the admonition to work harder as much was expected from the highly rated former United Nations professional. “You are coming at a time when your expertise is most needed, much is expected-there will be challenges but we will get through together. We, the board will continue to work with you for a smooth landing.” Mr. Siakor assured.

For his part, Mr. Gray-Johnson thanked the Board of SDI for his selection and promised to work assiduously for the betterment of the institution. “The board gave me a huge term of reference with key deliverables to be achieved in six month; I have drawn up a five month Workplan for myself, and will work towards that time frame. I am a result oriented person but will surely depend on all of you for my success; we will work as a team.”

In a brief remark, Miss Nora Bowier who is the immediate past Executive Director, assured Mr. Gray-Johnson of a fervent working relations from the SDI staff as it will be an opportunity to learn from his awe-inspiring experience.

Mr. Gray-Johnson joins the SDI with a wealth of experience as a lecturer, professional and statesman having served as one of the immediate past Commissioners at the Independent National Commission on Human Rights (INCHR). Gray-Johnson also served as Director of the Liberia Peacebuilding Office / Liberia Peacebuilding Fund Secretariat established in January 2009, from 2004 – 2008 a penultimate position he held before joining the SDI.

He worked with the United Nation Mission in Liberia (UNMIL), in various capacities – notably National Coordination Officer in the Office of the Deputy Special Representative of the Secretary General for Recovery and Governance, and contributed to a number of conceptual frameworks that have influenced policies in Liberia. These include the United Nations Common Country Assessment (CCA) for Liberia, the United Nations Development Assistant Framework (UNDAF), and particularly the Government of Liberia Interim Poverty Reduction Strategy (iPRS) and Poverty Reduction Strategy (PRS).

Prior to working with UNMIL, Mr. Gray-Johnson was a lecturer in the College of Liberal and Fine Arts at the United Methodist University, and also worked as Assistant Programme Officer for World Vision Liberia. He holds a Master Degree in Theological Studies (MTS), from Africa University in Mutare, Zimbabwe, and Bachelor’s Degree in Theology (B.Th.), from the Methodist University in Liberia.

He also has certificates from advance training in peacebuilding and conflict sensitivity, conflict management and resolution, conflict analysis, mediation and facilitation, in and out of Liberia including the 2009 Summer Peacebuilding Programme at the Center of Justice and Peacebuilding, Eastern Mennonite University (EMU) in Harrisonburg Virginia, USA, and a Senior Level Peacebuilding Course in Geneva, Switzerland, organized by the Geneva Centre for Security Policy, UNITAR and UNOPS Interpeace.

Powered by Drupal | Designed by designfarm.ie | Web Developement by calbasi.net